In a recent trip Sydney was on my itinerary. And of course, like all tourists I saw the Opera House from the Bay. My stay was limited to two days and I couldn´t catch any show. But sometimes serendipity helps; due to a change of plans I came back to Sydney on February 12, and bingo! I could attend the final performance of Verdi´s "Un Ballo in Maschera".
The facts about this amazing building are surprising and worth a synthetic survey. Back in the early Fifties, the prestigious Australian conductor Eugene Goosens felt that Sydney merited a really important musical center and he convinced the authorities of New South Wales that it would be a valuable advance for the city´s quality of life. He had the inspiration of choosing the Bennelong peninsula as its site, though Fort Macquarie had to be destroyed to build the opera house.
The competition started in 1955; 233 projects (!) were presented, and Danish architect Jörn Utzon won, firmly backed by one of the juries, the great Eero Saarinen. It was felt that Utzon´s concept was audacious, innovative and beautiful. And indeed all this was true, but the final building, although still stunning, corresponds only partially to Utzon´s ideas, for he had to deal with different governments of opposing views, as well as having to conciliate with capable engineers such as Ove Arup, who saw structural problems that needed solving.
There was trouble from the start, when the project wasn´t quite finished and nevertheless the Government began the first stage of building. The initial cost was 7 million Australian dollars and the finishing date was 1963; 102 million were really spent and the end came only in 1974... In 1965 Utzon resigned due to basic changes made against his ideas. "Malice in Blunderland", he said. His planned acoustics were for a 2.000-capacity hall, and it would have served both for opera and concerts; but the Government wanted two halls, the larger one holding almost 3.000 and destined for concerts; also, two chamber  halls were added.
On the outside view, great concrete shells that look like sails are taken from the same semispherical shape. No less than 580 pillars sustain the whole thing and are sunk 25 mts below sea level. More than a million ceramic tiles coat the roofs. The whole thing measures 183x120 mts.  The interior was completely redesigned after Utzon left. Granite and wood dominate. Vaults are sustained by fans (as in Wells Cathedral). 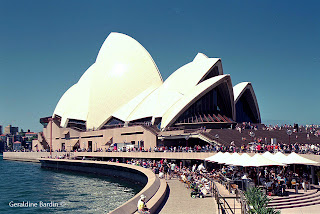 The Sydney Opera was inaugurated by Queen Elizabeth on October 20, 1973 with Beethoven´s Choral Symphony conducted by Van Otterloo. The first opera was Prokofiev´s "War and Peace" (October 28); and the Concert Hall started the following day with the Sydney Symphony under Mackerras with Nilsson as star singer.
The Australian Opera had the benefit of Joan Sutherland´s presence in many seasons. In 1999 came the reconciliation with Utzon, named adviser, and some parts of the vast project were modified following his ideas. In 2007 UNESCO recognized the Sydney Opera as Patrimony of Humanity. Currently four million people visit the vast project annually.
This is a tally of the current buildings known by the collective name of Sydney Opera: Joan Sutherland Opera Theatre, 1547 capacity, home to Australian Opera and Australian Ballet Company; Concert Hall, 2.679 cap., with the largest pipe organ in the world (10.000), home of the Sydney Symphony; Drama Theatre, 544; Music Theatre, 398; Studio Theatre, 364.  Administered by the Opera House Trust of the Art Ministry of New South Wales.
Contrary to what I thought (considering our BA mores) the Sydney Opera is active during the Summer. I was really sorry I couldn´t hear the Sydney Symphony three days later than the Verdi opera, for Ashkenazy was scheduled to conduct Sibelius´ mighty "Kullervo", a great score unaccountably never heard here.
They seem to be quite conservative in their programming: Verdi´s "Falstaff" and "Un Ballo in Maschera", Puccini´s "La Boheme", Offenbach´s "Orpheus in the Underworld" (the only slightly offbeat choice). The hand programme doesn´t give the repertoire but includes the roster of artists and I see  few well-known names in any category. Prices are very steep (Australia is an expensive country). My tickets were back in the stalls and I was warned I wouldn´t see the supertitles (the floor rises from the pit and close to the back is rather high and has an overhanging roof). You enter the stalls from the sides at various places.  I wasn´t impressed by the acoustics (it´s one of the points protested by Utzon): the orchestral sound is muted and dry, though the voices are better heard.
The cast had one strong point: Georgian soprano Tamar Iveri, fresh-voiced and dramatic. Mexican tenor Diego Torre, overweight and rather crude, has the notes but not the style for Gustav III, King of Sweden. José Carbó was a correct Count Anckarström (Renato in the Boston version); he is an Argentine living in Australia! Spry and precise, I liked Tanya Fiebig as Oscar; and Mariana Pentcheva, though vibrato-ridden, had authority as the fortune-teller. The others were in the picture and the choir was good.
Alas, the production was by La Fura dels Baus and unfortunately we´ll see it in November here. Utterly Un-Verdian, with nothing that suggests Sweden, cold and arbitrary, it showed the worst of current trends. Why bother to give us the original Swedish version instead of the ludicrous habitual Boston setting when so little is made of it?
For Buenos Aires Herald