Buenos Aires Lírica (BAL) and Juventud Lyrica proceeded with their seasons, the former with much better results. I don´t think that the inclusion by BAL of Gluck´s "Iphigénie en Tauride" was warranted, because last year we had a very worthy revival from the Compañía de las Luces led by Mauricio Birman. Much more necessary was the other "Iphigénie", "en Aulide", last seen at the Colón in 1949. But this said, I do admit that the BAL revival was valuable . I might add that the absence of the Colón has left the field wide open for BAL to be our most important BA opera organisation. It doesn´t mean that they are the equal of the Colón when this theatre is fully operative; of course, the resources available to a municipal theatre with a big budget aren´t comparable. And they, as the other companies that use the Avenida as venue, have the disadvantage of a small pit (45 players) that the Avenida´s owners stubbornly refuse to enlarge. But they have a consistently better level than other groups, for by careful planning and marketing they have managed to have full houses in all five performances of the operas they offer.

I have great sympathy for the aims of Juventus Lyrica (JL) founded before BAL by Ana D´Anna: to promote young singers is certainly laudable. Also, there´s great warmth and sincerity in what they do, which creates a specially nice ambience. Alas, they have two problems: they are underfinanced and that shows in the insufficient means for such items as scenery and clothing, and D´Anna has sometimes chosen badly her producers (other than herself). In the particular case I´m mentioning, producer Horacio Pigozzi ruined a "Barber of Seville" very well conceived musically by maestro Antonio Russo and with several worthwhile singers.

Now back to "Iphigénie en Tauride". The opera is the best of the "tragédies lyriques" composed by Gluck for and made him the legitimate successor of Rameau. It was written in 1778 on a libretto by Nicolas Francois Guillard based on Euripides. The libretto is good and the music, noble, inspiring and dramatic.

The musical side of this revival was quite satisfying. I was really surprised by the sense of style of the young Argentine conductor Alejo Pérez, who is having a fine career in , though associated rather with contemporary music. The result here, with an augmented Camerata Bariloche, was splendid: intensity, precision, beautiful playing and a dramatic approach that never went off bounds.

There was a fine cast. Virginia Correa Dupuy showed yet again that she is a special singer; the role is apt either for a dramatic mezzosoprano or soprano, and her voice has the timbre of a mezzo in the middle and low ranges but clears up in the high range and sounds like a soprano. Her musicality is refined (lovely pianissimo) and she acts with involvement. Tenor Carlos Ullán had one of his best nights in his well-sung and –acted Pylades, the bosom friend of Orestes, played and sung with excessive emphasis by baritone Luciano Garay but undoubted commitment. A new voice, Ernesto Bauer, sang an impressive Thoas, the Scythian tyrant. Crystalline singing from Eugenia Fuente (the goddess Diana), nice work from the Priestesses (Vanesa Tomás and Vanina Guilledo), a correct Greek woman (Andrea Nazarre) and forceful appearances of Mariano Fernández Bustinza (Scythian) and Claudio Rotella (temple minister). The young and well-chose finely prepared by Juan Casasbellas. The six dancers did agreeably in Cecilia Elías´ sober choreography.

Which brings me to the production and stage designs of Rita Cosentino. It was a mix of right and wrong. Right: the expressive interchange among the singers, always dramatic; the evolutions of the Chorus, functioning according to the Euripides play. Wrong: the use of a unit set (the ruins of a palace) to be both beach, prison, temple and room; the absurd stylistic solecisms, such as putting a twentieth-century armchair in a crucial scene. The costumes by Stella Maris Müller were pleasant for the women but unlikely for the men; the Greeks looked like informal boys of our age and Thoas was most un-kinglike. The lighting by Horacio Efron exaggerated the initial storm. 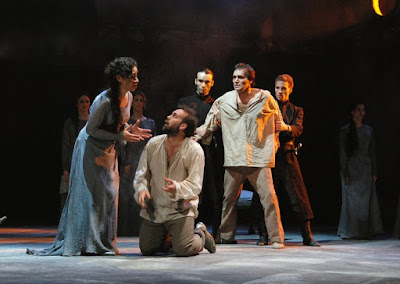 About the "Barber" I´ll be brief. Laura Penchi was a delightful Rosina, pert and fluid. Fabián Veloz was a convincing Figaro, no mean feat for a singer of little experience; he has a fine lyrical timbre. Duilio Smiriglia is overweight for Almaviva and hardly suggests a Count, but he has a nice voice, still undertrained. Alberto Jáuregui Lorda made an unconventional though credible Don Bartolo. Mario De Salvo is a good singer but lacks volume and presence for Don Basilio. Santiago Tiscornia was a sonorous Officer, Leonardo Menna a pleasant Fiorello, and poor Silvana Gómez had to deal with an outlandish marking of Bertha by the producer but sang acceptably. Very good playing from the orchestra and appropriate work from the Chorus under Miguel Pesce.

The production was unretrievable in every imaginable aspect. The completely incongruous Flamenco ballet (not bad in itself) in the Storm, the ridiculous restriction of space in the First Act, the tasteless, even obscene markings of the singers, the absurd clothes (the Count as a coya), the incredible transposition of the action to the twentieth century, etc.,etc. Mini Zuccheri is just as guilty in her clothing designs and the stage décor (Juan José Cambre) was very poor.