Diversity in Opera: Purcell and Perusso

The fascinating diversity of opera was well illustrated in recent weeks by two very different shows. La Plata´s Teatro Argentino, as it has done in recent years, presented a premiere by an Argentine composer: Mario Perusso wrote the music and his son Marcelo the libretto of an opera based on Jean Cocteau´s "The two-headed eagle" ("L´aigle à deux têtes") called "El ángel de la muerte". At the refurbished Teatro 25 de Mayo in Villa Urquiza the Colón Institute of Art presented the semi-opera by Henry Purcell "The Fairy Queen", quite loosely based on Shakespeare´s "A Midsummer Night´s Dream". First, a personal caveat. As readers know, I´m not usually late for the events I cover, but this time I was…twice. In the case of La Plata, I really feel I´m not to blame: it was a long-weekend Friday, so I planned two hours to get there instead of one; it took me an unconscionable two hours 20 minutes. In the case of the Theater 25 de Mayo, I plead guilty of ignorance. I had never been there and I don´t know the area. I looked at the Filcar and Juramento seemed the right way to get there from Palermo; alas, Juramento is obstrued by the railway; I was deviated by diagonals and couldn´t find my way back for a full 40 minutes. So I got there 20 minutes late. I´m sorry, then, but this review misses from 20 to 25 minutes of each show, and my verdict is on what I could hear. Argentine opera is more abundant than generally known; there are over hundred operas written, though not all are available (many were lost). There have been too tendencies: Argentine or Pre-columbine subjects, or European ones. Mario Perusso has written in both. He has created four, widely spaced chronologically: "La voz del silencio" (1969), an experimental work that was recorded; "Escorial" (1989) on an Expressionist play by Ghelderode; "Guayaquil" (1993) on the crucial meeting between San Martín and Bolívar; and the one I´m reviewing on a famous historical play by Cocteau. His play was premiered in 1946 with Edwige Feuillère y Jean Marais and the film was made in 1948 with the same actors. The play is loosely inspired in the murder of the famous Sissi, wife of the Austrian Emperor Franz Joseph. An anarchist tries to kill the Queen in the opera, but she, a recent widower of her husband, assassinated on the very day of her wedding, finds in the anarchist an amazing physical resemblance to her husband; both fall in love at first sight, and the story goes on with many surprising twists. The principals are mezzosoprano and tenor, and other characters enrich the action: the Queen´s mother (Archduchess), the director of the secret police, Oskar de Grössenbach (important member of the Court) and Noemí (lady in waiting). The libretto innovates from time to time on the original play, but the general traits remain. The music is accessible, with a combination of tonality and atonality that is never aggressive and often lyrical; the vocal lines are quite melodic in such pieces as the love duet. The orchestration is attractive though not original. In all, this is a reasonably good opera that combines love and politics adroitly. For me Perusso´s best was "Escorial", but I have a bent for expressionism. The production was very good, with beautiful scenery by Marcelo Perusso and convincing moves for the singers. There were also lovely clothes by Stella Maris Müller and fine lighting by José Luis Fiorruccio. The orchestra was prepared and led with great understanding by Guillermo Scarabino. There was no chorus. The lead singers were interesting. The experienced mezzosoprano Alejandra Malvino dealt finely with her vocal lines and cut a beautiful figure. Young tenor Marcelo Puente certainly has talent, good looks and an attractive voice, but he lacked the big guns for some of the music. A pleasant Patricia González (Noemí), an expressive though uneven Enrique Folger, a very strong Leonardo Estévez (Richard of Streber, the chief of the Secret Police), a well-sung but undramatic Archduchess (Alicia Alduncin) and three bit singers, Oreste Chlopecki, Claudia Montagna and Roxana Deviggiano, made up the good cast. 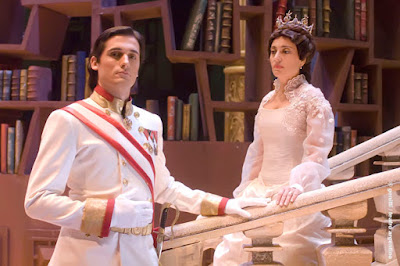 "El ángel de la muerte" de Mario Perusso
Henry Purcell´s "The Fairy Queen" (1692) is a series of "masques", that typically English semiopera that combines music with dances and Baroque scenery and has the character of a divertimento. It used to be combined with the plays. It has little argumental relevance and no dramatic coherence, so its charm comes from the beauty of the different fragments, very high in this case. It was premiered years ago by a British group of great quality. I was unprepared for the very nice and serious results of this production of the Colón Institute, although I had seen a good condensed "Orlando" (Handel) two years ago, supervised (as in this occasion) by the notable countertenor Jeffrey Gall. A valid orchestra very well led by Bruno D´Astoli, with the assistance of a true specialist like Igor Herzog, a stylish production by Lizzie Waisse, agreeable choreography by Margarita Fernández, funny and expressive puppets by Adelaida Mangani (a curious but convincing addition) and a particularly beautiful stage design by Gerardo Pietrapertosa, plus a decent cast and the adequate restauration of the well-appointed small theatre, all summed up made for a fine evening. Among the singers I single out Andrea Maragno, Damián Ramírez, Soledad Espona and Lucas Somoza. For Buenos Aires Herald