“Jonny spielt auf”, an opera of its time

Germany, 1927. The Weimar Republic (1919-31) had its big crisis in 1923, when hyperinflation wiped out the savings of millions of citizens. The Nazis made their first attempt at seizing power but failed . A stabilization of the mark at its prewar par value was enforced. In 1925 Field Marshal von Hindenburg , then 77, succeeded Ebert as President. An investment boom brought an artificial era of prosperity which lasted until 1929. It is during this period of recovery and before a new downturn started in 1929 led to Nazi domination that Ernst Krenek’s “Jonny spielt auf” was composed and premiered.
World War I had been provoked by Germany; its loss left the national mood in disarray and a spirit of cynicism and iconoclasm engendered a musical school that reflected this bitterness. Kurt Weill wrote “Die Dreigroschenoper” (“The Threepenny Opera”) in 1928 on a Brecht text, and the collaboration with the great playright culminated with “Grandeur and decadence of the City of Mahagonny” (1930), both works seen in our city in recent years. And the young Paul Hindemith, prior to his later academic style, created such strong stuff as “Murder, hope of women” on a play by Kokoschka (yes, the painter) in 1919, or “Cardillac” in 1926 (both awaiting a local premiere). 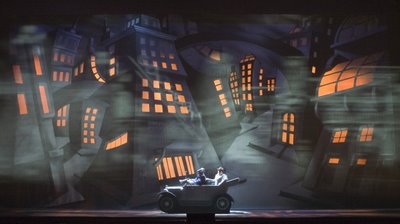 Marcelo Lombardero has long been attracted as singer and producer by th German/Austrian twentieth-century school. Apart from the Weills of the Weimar Republic period, as producer he has put on Viktor Ullmann’s “The Emperor of Atlantis” (written in a concentration camp) and Zemlinsky’s posthumously premiered “King Kandaules”. And he sang in Korngold’s “Die Tote Stadt” (“The Dead City”) , 1920. When he took over from Tito Capobianco the Artistic Direction of the Colón (initially called Coordination, but no matter) , he told the then Culture Secretary Gustavo López that he accepted with the condition that he would have a production of his own , for he was a professional producer. His choice was the Latin-American premiere of Ernst Krenek’s “Jonny spielt auf” (“Jonny plays”), a huge success in 1927 (he was 27) when many German theatres rivalled in multiple productions of the opera. It was very much what the Germans call a “Zeitoper” (“an opera of its time”) and nowadays its appeal is limited, but putting it in context it’s worth getting to know , even if for me Hindemith or Henze or Schoenberg deserve precedence (there’s plenty of them unknown here). It was going to be the sole hit of his career, for Krenek was at heart a follower of the twelve-tone Viennese School, whose often hermetic and difficult music was respected by specialists but rarely appreciated by mainstream music lovers (an exception would be Berg’s “Wozzeck”). He was twelve-tone before and after “Jonny...”, but there he attempted a schizophrenic blend of German expressionism ( frenzied Late Romantic writing) with whiffs of jazz-influenced white dance music (epitomized by the Paul Whiteman Orchestra). It doesn’t really work due to the unbelievable libretto by Krenek himself, which mixes a torrid love story of composer and singer with violin players of classical (Daniello) and jazzy extraction (Jonny) and the stealing of Daniello’s Amati by Jonny. We have to endure pseudophilosophical mumbojumbo concerning the composer Max’s love for the glacier as a symbol of nature’s power and transcendence. The music is mostly skillful and has patches of inspiration, although its very different worlds never jell together. Krenek had a long career; he died at 9l after spending decades in the USA turning out learned and cerebral music that is rarely played. But he could be less dogmatic and be expressive, as in his “Symphonic Elegy” . It was Lombardero’s production and Daniel Feijóo’s spectacular stage designs that made the day, for the cast failed in its two principals: Carlos Bengolea should be doing secondary character parts and not leads, for his vocal quality is grating in the extreme; he has been promoted much beyond all logic; and Cynthis Makris’ Anita showed her in declining vocal condition with a harsh and vibratoed high register (I tremble for her announced Turandot), though she moves well and looks handsome. Luciano Garay made a brave shot at playing Jonny, the Negro jazz-player, done as it was in the premiere by a white in blackface “a la Al Jolson” in “The Jazz Singer”, one of the first films with sound. He is lithe and a good actor, and he only faltered in his solo dominated by a brass chorale. Víctor Torres did a good Daniello, Patricia González was adequate as Yvonne, Ricardo Cassinelli yelled as usual (he should be honorably sent home), and there were good jobs from Hernán Iturralde , Gabriel Renaud and the three caricaturesque Police officers (Marcos Padilla, Norberto Marcos and Walter Schwarz). Stefan Lano’s conducting was rather slow but technically capable, and the little-employed Chorus under Salvatore Caputo was correct. With unerring sense of time and space Lombardero moved impeccably his singers in a production that, aided by Feijóo (who also had recourse to slides of the glacier with the collaboration of Leandro Pérez), Luciana Gutman (costumes) and Horacio Efron (lighting) gave us a fully valid view of the libretto; the last quarter of an hour was simply stunning, with its train and its clock that transforms into a sphere in which Jonny rides and leads the crowd with jazzy strains. 19/09/06 para el Buenos Aires Herald 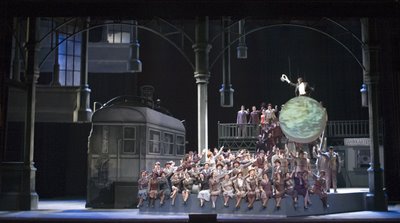