Unnecessary “Swan Lake” at the Colón

There´s plenty to criticize about Maximiliano Guerra´s tenure as Director of the Colón Ballet during Darío Lopérfido´s two years, but the fact remains that for 2017 he had planned two very interesting revivals and that both have been wiped out by Paloma Herrera. And both were part of the ballet subscription series bought by the public. The first was "The Taming of the Shrew", the splendid Cranko creation seen decades ago by the Stuttgart Ballet. Negotiations were advanced and stage designs had already been built when Herrera decided to offer instead Tchaikovsky´s "Swan Lake".  The ballet season was supposed to end with the revival of Roland Petit ´s "Notre Dame", the only one of his choreographies ever seen here, but in another of the numerous Colón administrative silly acts, he didn´t get paid...and decided that he wouldn´t work with our teatre in the future. But he died, and now there was a positive contact with the holders of Petit´s rights and the chance to recuperate a valuable artist was there; no more. Herrera healed instead another Colón disaster: Tchaikovsky´s "The Nutcracker" with Nureyev in his own choreography was an enormous success here; after his death, his representative, Aleth Francillon, revived it for a while, but eventually she had a terrible row with both Colón erstwhile Director Pedro Pablo García Caffi and Ballet Directress Lidia Segni; Francillon vowed publicly that she wouldn´t return whilst both held their posts. But with Herrera she will.  So we´ll have the piece during December´s last week.
As Guerra had scheduled Tchiakovsky ´s "The Sleeping Beauty" for this year, now we have an embarrasment of Tchaikovskian richness which I find quite unnecessary and can only have sense in companies that produce a big quantity of ballets in any given year, but that´s not the Colón. Oh well, "Swan Lake" always sells: it´s the most often seen ballet all over the world; and the six performances with three casts were sold out. A good point both artistically and financially:  the theatre staged Mario Galizzi´s fine version based on the originals by Marius Petipa and Lev Ivanov and revived by Sabrina Streiff; and Galizzi donated it to the Colón. 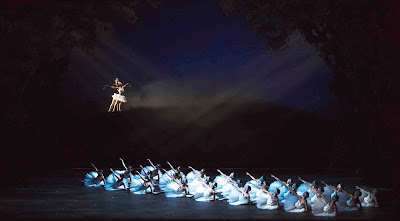 Paradoxically the complete "Swan Lake" came late to our theatre: Jack Carter´s inventive choreography was seen in 1963  and lasted for almost four decades. Marta García (Cuban) did her own version in 2002, and in 2013 we got to know Peter Wright´s ideas created for the Birmingham Royal Ballet in 1981. Between García and Wright we had in 2006 Galizzi´s views, and his Odette/Odile was Herrera.
Apart from Galizzi´s pure style, his main innovation is clever: he unites the first two acts and the last two, obtaining greater dramatic coherence. It´s worth remembering that the magician Von Rothbart makes his daughter Odile take the appearance of Odette, fooling Prince Siegfried  (the famous Black Swan pas de deux); and that the spell converts women into swans as the day comes. In the wildly Romantic tragic ending, Siegfried drowns in an artificial tempest and Odette commits suicide, to be joined eternally to Siegfried, thus breaking the magician´s malefic power.
Musically the second Act is the epitome of "ballet blanc", whilst the Third (the only in Court) is a vast divertissement  interrupted by one dramatic incident. A lot of the music is inspired and beautiful, showing the composer´s  talent for the ballet in this first one, written during 1875-6.
For purely practical reasons (that day my grandchildren were available  and both grandparents went with them, for we believe in forming their cultural taste at an early age) I chose the third cast, with Karina Olmedo, Edgardo Trabalón and Alejandro Parente (at this stage of his career, Von Rothbart). First cast: Nadia Muzyca, Juan Pablo Ledo, Dalmiro Astesiano; second cast: Ayelén Sánchez, Federico Fernández, Alejo Cano Maldonado.
The general impression was positive. An agreeable traditional staging "produced by the Colón" (that´s all it says), with good lighting by Rubén Conde. The corps de ballet is well disciplined and taught by a knowledgeable team. And the Buenos Aires Philharmonic responded adequately to Darío Domínguez Xodo´s firm indications. 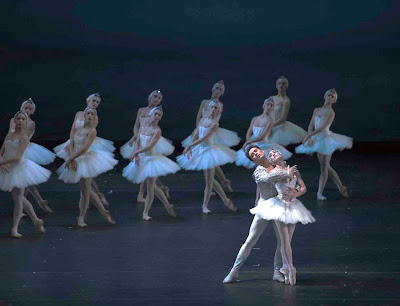 The completely stagnated structure of the Ballet hasn´t been renovated for too many years, and its only prima ballerina is the veteran Olmedo; the experience shows in her fine interpretation, the years in bits that should go faster. No male dancer has been promoted during the last fifteen years or so, but talent and necessity have "named" artists in first roles, such as Trabalón, since the year 2000. He keeps well and did a convincing interpretation. And Parente of course was good as Rothbart, he who did Siegfried for decades.
But for me the revelation was the agile and spry Buffoon of Williams Malvezzi, who gave character and fun to the First Act. And good dancers were to be seen in the Act I Pas de trois, Act II famous Pas de quatre (imitating the swans), three swans who did solos, in Act III the five Princesses  plus the Spanish and Neapolitan Damces, the big Czardas and Mazurka, and the Pas de quatre in Act IV.
For Buenos Aires Herald
​​