Most titles in an opera season take a whole evening, but some important stuff comes in smaller packages: witness the Puccini “Trittico”. It’s also the case with Igor Stravinsky, for three of his four operas are short: “Le Rossignol”, “Mavra” and “Oedipus Rex”. It would make sense to combine all three in the same show, and similar combinations might be found in Schoenberg or Milhaud; it would be quite worthwhile and necessary. Marcelo Lombardero, the Colón’s current Artistic Director, has made a different and riskier option: an opera with two ballets; almost three ballets, for “Le Rossignol” can be considered an opera-ballet . There have been similar instances in the history of the Colón (e.g., a Ravel triple bill in 1973). The main drawback is that opera subscribers don’t necessarily like ballet (the viceversa also applies), but Lombardero believes in trying to bridge the gap and it’s a tenable position. “Le Rossignol” was long overdue, for it was last revived in 1950. “Les Noces” and “Petrushka” have been seen at various times during the last decades, at the Colón and elsewhere (the memorable Nureyev interpretation of Petrushka still stands sharp in my memory), but they haven’t been revived recently. So in principle they are welcome, for both are masterpieces. Other interesting possibilities: “The Fairy’s Kiss”, “Danses concertantes” and especially “Agon”. The unifying force of this show was choreographer Oscar Araiz, since last year Director of the Colón Ballet. He has had a vast trajectory both here and abroad and his creation of new ballets has been abundant . Now he has decided to put on his own choreographies of all three Stravinsky works. As the banner of this article states: one hit and two misses. “Le Rossignol” was sandwiched between “Les Noces” and “Petrushka” and emerged as sole winner. 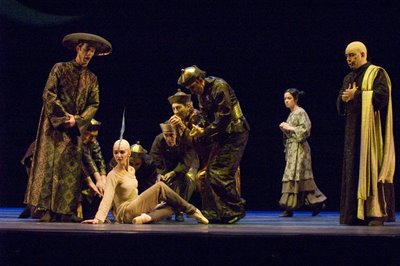 “Le Rossignol” is a charming work based on Andersen’s tale “The Nightingale and the Emperor of China” with French libretto by the composer and Stepan Mitusov. It has two styles in its brief three acts: the first, redolent of Rimsky-Korsakov and French impressionism, was written in 1909; the much more modern second and third were created in 1913 after his three great early ballets that revolutionized music. It’s a charming fable about the benefits of natural song (the nightingale heals the Emperor) against an artificial bird sent by the Emperor of Japan (the Emperor falls ill and Death hovers about). As it was presented by Serge Diaghilev’s Ballets Russes in 1914, certainly the right way to do it is as Araiz did: dance on stage for both Nightingales and the Fisherman (and a corps de ballet) mixed with real singers for other roles . And both his production and choreography were entirely apposite, with beautiful oriental stage designs by Tito Egurza and costumes by Renata Schussheim. Laura Rizzo’s purity and sureness of emission did wonders as the Nightingale, and Virginia Correa Dupuy contributed a sensitive Cook. Enrique Folger was a bit strained as the Fisherman and Emilio Estévez sang a stalwart Emperor. Nahuel di Pierro (Chamberlain), Sergio Gómez (Bonze) and Elisabeth Canis (Death) were undervoiced. The dancers were splendid: Maricel de Mitri (Nightingale), Miriam Coelho (Mechanical Nightingale) and Leandro Tolosa (Fisherman) were abetted by an excellent Corps de Ballet. It was nicely conducted by Francisco Rettig. Although “Les Noces” is a Russian folk marriage rite, it was premiered in 1923 in a French translation by Charles Ramuz and although there’s a Russian version it’s perfectly legitimate to give it in French, as the Colón did. It is defined as a sung ballet or as a choreographic cantata, and it’s still musically a tough nut to crack for present-day audiences, faced with relentless syllabic singing in markedly abrupt rhythms, something like a vocal counterpart to “The Rite of Spring”; but its musical quality is superb , even if it reduces the voices to instruments; and its instrumental ensemble is completely new: four pianos and abundant percussion. Musically Rettig got very precise playing, but some of the solo voices were uncomfortable (Mónica Philibert, Gabriel Renaud); the others were acceptable (Cecilia Díaz, Juan Barrile, Mario De Salvo). And the Chorus, well-trained by Salvatore Caputo, lacked the razor-sharp neatness ideally needed. But the big problem was the concept of Araiz. About two decades ago the Colón did the piece faithful to the original Nijinska idea: players and singers onstage at both sides, and the dancing in the middle, in Russian style and costumes. Denaturing Stravinsky’s essential thought, we were given Neoclassic calisthenics in neutral clothes. Good dancing by Silvina Perillo, Juan Pablo Ledo and the corps de ballet couldn’t redeem the basic fault. Alas, “Petrushka” contains originally two masterpieces: the music, but also the marvelous choreography by Fokin completely attuned to the A. Benois story combining the Carnaval at Saint Petersburg with an erotic triangle of marionettes that come alive and have a tragic ending; they are a dark Russian adaptation of the "commedia dell'arte”. You can’t perfect perfection, and the attempt by Araiz to substitute it with a real-life triangle (homo-hetero) of Nijinsky, Romola and Diaghilev, seemed completely arbitrary and quite at odds with the music. A few passages were psychologically interesting, but I felt it was largely a failure. Again good dancers (Edgardo Trabalón, Dalmiro Astesiano, Karina Olmedo) to no avail. Rettig conducted the 1947 version (I prefer the original one) with reasonable results. 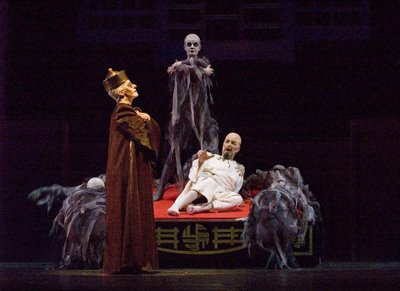