The Colón’s current Artistic Director, Marcelo Lombardero, has opted for one of the operas of the Da Ponte trilogy to represent Mozart in the season commemorating the 250th anniversary of his birth. Lombardero’s predecessor, Tito Capobianco, had planned to premiere “Mitridate, Re di Ponto”, an early “opera seria”, and I would have preferred it for such an occasion warrants a bit of programming audacity. However, “Cosí fan tutte” was in fact audacious not by being chosen but because it was presented with an all-Argentine double cast with the exception of Adriana Mastrángelo, and she’s Uruguayan. Considering the very high prices for residents and the discrimination against foreigners who pay as much as double in certain seats and performances, one can seriously doubt if this is honest value for money in an international opera house. Even so, I was rather happy at the results of this revival and I cavil whether it’s so easy to find decent local casts for this particular work in many First World countries. Of course I’ve written several times for the HERALD about this marvelous comedy, for this opera has been offered , e.g., by both principal alternative opera companies, Buenos Aires Lírica and Juventus Lyrica, and some times with singers that were also at the Colón (at a third of the price). Seeing now two performances due to the double cast, I marveled anew at the immense skill and beauty of Mozart’s music, but also at the talented Da Ponte’s cynic concoction. Although many have a wrong sense of rococo blandness about the late Classical period, it is also the time of the Marquis de Sade, of Choderlos de Laclos’ “Dangerous liaisons”, of the Casanova Memoirs (he was a great friend of Da Ponte’s), of the French Revolution. Its cynicism and ambiguity are certainly contemporary. And, if Don Alfonso can be decried as a misogynist bastard by feminists, the completely uninhibited Despina has an extremely low opinion of men and she uses them as instruments of pleasure and money. Michael Hampe has done productions of Mozart’s “The Magic Flute” and Rossini’s “Cinderella” for the Colón and has shown that his European fame is well acquired, for those productions had taste and style. There was conflict with the Colón when he did “The Magic Flute” in 2004, for he was angry at what he felt had been a lack of collaboration. Maybe (I’m not sure but it seems a reasonable surmise) that’s why he didn’t come personally for “Cosí” and his Santiago de Chile production was staged here by Caroline Lang (it was a co-production with Santiago). Hampe opted for a traditional production, with pleasant stage designs evoking Naples imagined by Ramón López (also author of the lighting plot) and agreeable clothing by Germán Droghetti (the Albanian costumes were funny). Some people were disappointed at the linearity and the unsurprising quality of the staging; not me: Hampe/Lang respected the libretto and the music at all times and made the story intelligible. Maybe there was too much symmetry but by and large the comedy worked. Creativity of the wrong kind can ruin Mozart. A definite plus was the conducting of Rodolfo Fischer, Chilean, who had made an impressive debut with Buenos Aires Lírica when he conducted two years ago “Ariadne auf Naxos” (R.Strauss). With an acute sense of style and balance both in the pit and in connection with the stage, he accomplished with both casts a sense of easy ensemble and fine phrasing. In a few spots matters could have moved a bit faster, however. The Orchestra generally played well, with the exception of the grievous horn mistakes in the Rondo “Per pietá” (in both performances I saw). The Chorus did its rather easy job well under Salvatore Caputo. Both casts were good. Fiordiligi is very arduous musically; Virginia Tola finally made her comeback (when some years back the Colón didn’t pay her work in “Les Contes d’Hoffmann” she sued and won); having done the part recently at Brussels’ La Monnaie Theatre, she sang and acted with considerable ease, aided by her physical allure;even if one felt some strain in top notes, most of her musical line was accurate and beautiful. Carla Filipcic Holm had her first big role at the Colón, but she has sung Fiordiligi successfully at the Avenida; in full control of her beautiful voice, she did some exquisite things and played the comedy with spirit. Both Dorabellas (Adriana Mastrángelo and Mariana Rewerski) had some trouble managing the music with real smoothness and euphony and their timbre didn’t sound mezzo-ish enough to contrast with Fiordiligi, but they were good in ensemble work. Graciela Oddone was a pert and funny Despina with fresh voicing, better than the young María Virginia Savastano, who overdid the vulgarity. The refinement and “savoir faire” of Raúl Giménez made him by far the best Ferrando; Carlos Ullán was good in the ensembles but had problems with long notes in the arias. Hernán Iturralde was a stalwart Guglielmo sung with very firm tones; the much younger Nahuel Di Pierro was certainly fluent and pleasant but a bit undervoiced; both are fine comedians. The lyrical voice and gentle manner of Víctor Torres doesn’t jell with Alfonso’s image, though he sang beautifully; Omar Carrión’s demeanour was the right one for the old sceptic but his voice is too small for the Colón. 22/06/06 para el Buenos Aires Herald 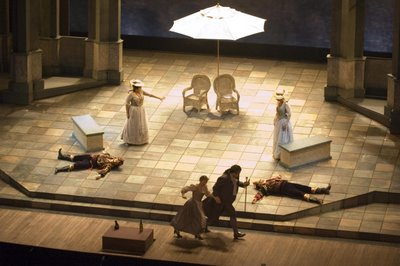